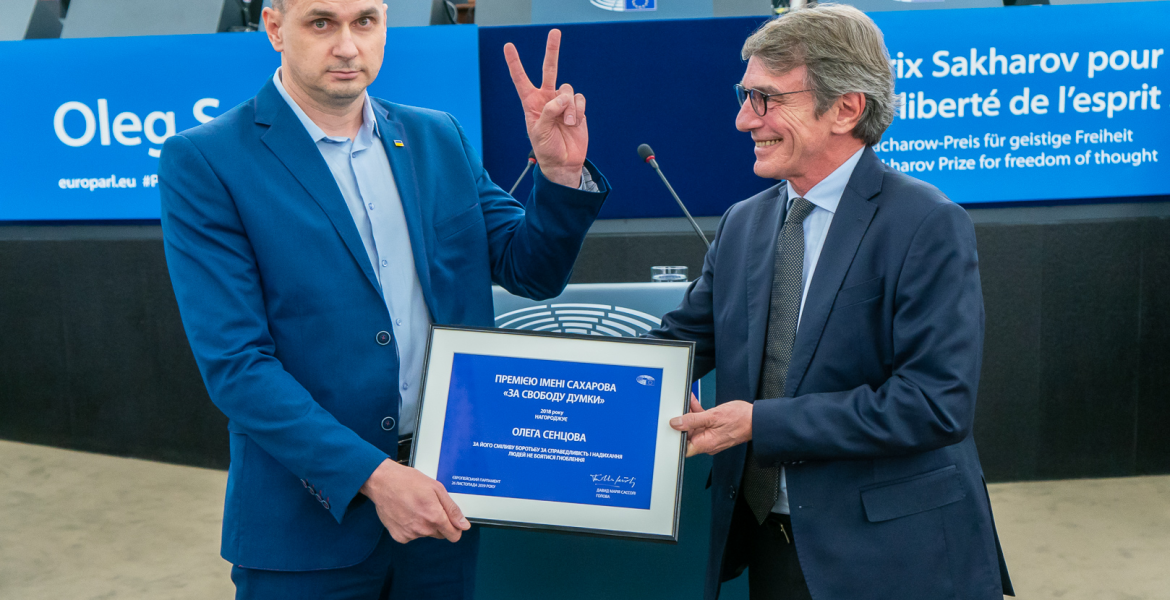 Ukrainian civil rights activist Oleg Sentsov,  recently released from a Russian prison and who has become a symbol of all political prisoners in that country, has warned the West “not to forget” those “languishing” in Russian jails.

He said, “There are young men still languishing behind bars in Russia, people who have done nothing wrong, who, like me, may also be subjected to torture.”

“Their homes are being searched while they languish in jail.”

Sentsov was speaking after he received his Sakharov Prize for Freedom of Thought prize in person from the European Parliament’s president, Italian MEP David Sassoli, on Tuesday.

He told this website, “It is a huge honour and a huge responsibility to receive this prize. I accept and take this prize not as a personal honour, but as a prize to all Ukrainian political prisoners that have been in Russian prisons and to all that are still there.”

He praised the EU’s democratic values, criticised Russia’s “militarist” practices and denounced the fact that the right to demonstrate in Russia was still “very limited” in Russia.

Sentsov called for the “liberation” of all political prisoners in his homeland, said to number at least 70, many of whom he says were arrested after the annexation of Crimea.

The strapping film maker, he is 1m 90cm in height, recalled how he seriously lost weight while in custody after his arrest in Independence Square in Kiev.

He said that as well as “not forgetting” innocent people currently in custody in Russia, “there are also people still fighting in trenches in eastern Ukraine who are risking their lives. The message I want to give is: please do not forget these people.”

Sentsov was sentenced by a Russian court to 20 years in prison on what many saw as spurious charges of plotting terrorism in illegally annexed Crimea.

The Parliament held a special award ceremony on 26 November for the Ukrainian film director during its plenary in Strasbourg. The prize consists of a certificate and €50,000.

Sentsov said, “I do not want to look to the past but to the present and the future. But the problem is that there are still people who, as I was, are still behind bars in Russia and those in the EU, Europe and the West need to remember this.”

He hailed the EU and its members states as “a great example” to countries like Ukraine, but added, “We hear a lot about the internal problems in the EU but I can tell you this: people in Russia wish they had just a small number of these problems. In Russia, the problems we have to deal with are much more complex than those here in Europe.  We have to deal with military aggression and ancient corruption. The issues and problems in Russia are on another level and scale altogether.”

He added,”It means that for many in Ukraine it is all a question of survival. That is why it is also important to remember the thousands who have fallen in the conflict in eastern Ukraine.”

Sentsov’s appearance before MEPs is a far cry from what he calls a “nightmarish ordeal” at the hands of his Russia captors.

Until recently, he was serving a 20-year prison sentence in Russia for “plotting terrorist acts” against Russian de facto rule in Crimea. He was released on 7 September following a prisoner swap between Russia and Ukraine.

Sentsov was awarded the European Parliament’s Sakharov Prize last December in recognition of what the institution calls his peaceful protest against the illegal occupation of his native Crimea and also for his “courage, determination and his convictions in support of human dignity, democracy, the rule of law and human rights.”

He said, “When they detained me, tortured me, interrogated me and found nothing, they still did not release me. They told me: ‘We are going to put you in jail either way. Nobody is getting released.”

He said he was interrogated in the evenings and at night and FSB members “would beat me, suffocate me with a bag and use batons to beat me over the heels.”

Recalling the tough conditions in which he was held, he noted, “They undressed me and threatened to rape me. This is normal interrogation and nothing unusual. After being in prisons I saw a lot of stuff like that. I heard enough to understand that this was the ‘easy’ treatment.”

He said, “You need to understand that this conflict (between Russia and Ukraine) is not a clash between two countries or two peoples. It’s a clash of two world views. Progressive Ukrainians want to live like they do in Europe, with European standards and principles, in a country that is free and civilized. They oppose the so-called Russian world, the Russian regime, the Putin regime.”

Sassoli said, “I salute Sentsov as a man of courage and determination who resisted injustice with dignity and stood up for democracy, the rule of law and human rights.”

“Sentsov was released as part of an agreement between Russia and Ukraine on an exchange of groups of prisoners. We welcome this as a step in the right direction and a sign of decreasing tensions between the two countries.”

Sentsov, who was chosen from a short list of three for the Sakharov award by the Parliament’s political group leaders, has become a symbol for the approximately 70 Ukrainian citizens illegally arrested and given long prison sentences by the Russian occupation forces in the Crimean peninsula.

Parliament’s former president Antonio Tajani is among those paying tribute to Sentsov, saying, “Through his courage and determination, by putting his life in danger he has become a symbol of the struggle for the release of political prisoners held in Russia and around the world. By awarding him the Sakharov Prize, the Parliament is expressing its solidarity with him and his cause. His struggle reminds us that it is our duty to defend human rights everywhere in the world and under all circumstances.”

Speaking after he was given the award in Strasbourg, members of the EPP group, which nominated him, said that Sentsov’s call for freedom and justice was also a call to “respect the values that we all share in the European Union.”

An EPP spokesman said, “The group is delighted to welcome and honour Sentsov personally in the European Parliament during this plenary session.”

His lawyer Dimitry Dinze said, “During his detention and hunger strike his body shut down but the Russian authorities could never break his iron will.”

Born in 1976 in Simferopol (Crimea), Sentsov studied marketing at Kyiv State Economics University. He did not particularly enjoy these studies, which he said ‘disillusioned’ him. After managing a computer club in Simferopol and playing online video games professionally for years – eventually becoming the Ukrainian champion – Sentsov became the leader of the Crimean gaming movement. This experience of the gaming world served as inspiration for his first feature film Gamer, which was released in 2011 and later screened at a number of international film festivals.

Awarded each year by the Parliament, the prize was set up in 1988 to honour individuals and organisations defending human rights and fundamental freedoms. 2018 marked 30 years since the Sakharov Prize was first conferred. The prize was awarded for the first time, jointly, in 1988, to Nelson Mandela and (posthumously) to Soviet dissident Anatoli Marchenko.